Types of cellular metabolism
The energy for ATP synthesis comes from organic molecules (such as carbohydrates), or from sunlight, or from inorganic electron donors. We can classify organisms according to their source of energy and organic carbon:

Metabolic pathways carry out reactions that capture energy from these various sources (organic compounds, sunlight or chemicals) and couple them to synthesis of ATP from ADP.
Summary of cellular respiration essentials

*except in some phototrophic archaea that use bacteriorhodopsin to directly pump protons across the membrane using light energy – we’ll see that in the section on photosynthesis.
Introduction
The standard freshman biology textbook presentation focuses narrowly on glucose metabolism by animal cells, barely touches on fats and amino acids, and ignores most of the metabolic diversity of life. Moreover, the standard textbook version of how this elaborate metabolic network evolved beginning with glycolysis is probably wrong, accordingly to the compelling essay by Lane et al. (2010).
In this class, we will take an evolutionary approach that begins with concepts and processes fundamental to all living cells, that must have been present in the last universal common ancestor (LUCA).
Cellular Respiration: the BIG Picture
Before we get into any of the details, let’s start with the big picture concept of how cellular respiration works and what it accomplishes:

We find that all cells – Bacteria, Archaea, Eukarya – use the energy released via ATP hydrolysis (ATP –> ADP + Pi; Pi = inorganic phosphate; ΔG = -7.3 kcal/mol) to perform most of the cell’s work. How do cells make ATP? Cells can make ATP in either of two ways: either by substrate-level phosphorylation of ADP, or by oxidative phosphorylation of ADP.

Oxidative phosphorylation synthesizes the bulk of a cell’s ATP during cellular respiration. A proton-motive force, in the form of a large proton concentration difference across the membrane, provides the energy for the membrane-localized ATP synthase (a molecular machine) to make ATP from ADP and inorganic phosphate (Pi). The proton gradient is generated by a series of oxidation-reduction reactions carried out by protein complexes that make up an electron transport chain in the membrane. The term oxidative phosphoryation, then, refers to phosphorylation of ADP to ATP coupled to oxidation-reduction reactions. 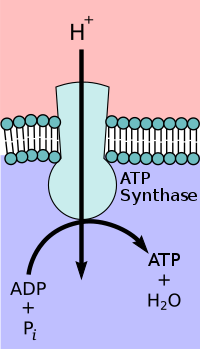 Oxidative phosphorylation uses the energy from a membrane proton gradient to power ATP synthesis from ADP and inorganic phosphate . Image from Wikimedia Commons

The proton-motive force is a combination of a difference in proton (H+ ion) concentrations across a membrane, and the resulting electrical potential. All prokaryotic cells (Bacteria and Archaea) maintain a proton gradient (pH gradient) across their plasma membranes. Mitochondria maintain a proton gradient across the inner mitochondrial membrane. The interior of the bacterial cell (or the mitochondrial matrix) is relatively alkaline, whereas the exterior periplasmic space (or the mitochondrial intermembrane space) is relatively acidic. Because protons are positively charged, an imbalance of protons also creates an electrical charge difference across the membrane. This proton motive force is a form of stored energy, and protons returning across the membrane down their concentration and electrical charge gradients release free energy that can be harnessed by ATP synthase to make ATP. The lipid bilayer membrane is almost impermeable to protons, so the proton gradient is stable and normally does not discharge except via ATP synthase, or via proton channels that may open in the membrane.

This proton gradient is analogous to water stored in an elevated reservoir. The higher the water level in the reservoir, the more potential energy is available to accomplish mechanical work like turning a water wheel to grind grain. In the same way, the greater the difference in proton concentrations across the membrane, the more energy is available for ATP synthase to make ATP. Indeed, the ATP synthase complex even resembles a water wheel, in that the flow of protons down their concentration gradient, through ATP synthase, causes a part of ATP synthase to rotate.
F1ATP Synthase – watch the video below and know this!

The ATP synthase enzyme complex is located in the membrane, and is a remarkable rotor-stator molecular machine (Stock et al. 1999).

The proton motive force drives protons through a channel in the ATP synthase, and turns the rotor at approx 100 rpm. The turning rotor changes the shape of the cytoplasmic subunits (called the F1 ATPase), which bind ADP and inorganic phosphate and bond them together to form ATP. Each 360 degree turn of the rotor results in synthesis of 3 ATP molecules.
The ATP synthases in mitochondria, chloroplasts, and Bacteria are all structurally similar, and their amino acid sequence similarities are consistent with a common evolutionary origin (Watt et al. 2010). Lesser degrees of similarity, and more distant evolutionary relationships, exist with Archaeal ATP synthases and with vacuolar membrane ATPases. Vacuolar ATPases pump protons across the membrane using the energy from ATP hydrolysis. Indeed, Bacterial and mitochondrial ATP synthases can work in reverse to hydrolyze ATP and pump protons across the membrane to increase the membrane proton gradient (see end of video above).
What creates the proton gradient across the membrane?
Chemiosmosis – this is really important!

The transfer of electrons from one molecule to another is called an oxidation-reduction, or redox reaction. A molecule that loses electrons is oxidized; a molecule that gains electrons is reduced. Different molecules have different tendencies to gain or lose electrons, called the redox potential. A redox reaction between a pair of molecules with a large difference in redox potential results in a large release of free energy.
In aqueous environments, the transferred electrons pick up protons. The result is that hydrogen atoms (a proton + electron = hydrogen) are transferred, and many enzymes that carry out redox reactions are called dehydrogenases. Living cells are the original hydrogen fuel cells.
Cellular energy metabolism features a series of redox reactions. Heterotrophs oxidize (take electrons from) organic molecules (food) and reduce (give them to) an electron carrier molecule, called NAD+ (in the oxidized form) that accepts electrons from food to become NADH (the reduced form). NADH then cycles back to NAD+ by giving electrons to (reducing) the first complex of the membrane electron transport chain. Thus NAD+/NADH is a key intermediary in shuttling electrons from food molecules to the electrons transport chain for respiration.
For more info, my lecture snippet on NAD+ and NADH:

NADH is a high-energy molecule. The oxidation of NADH: NADH + H+  + ½O2 -> NAD+ + H2O is highly exergonic, with a standard free energy change of -54 kcal/mol (7-fold greater than the standard free energy change for ATP hydrolysis of -7.3 kcal/mol).
The membrane electron transport chain and chemiosmosis is a strategy for cells to maximize the amount of ATP they can make from the large amounts of free energy available in NADH. The electron transport chain subdivides the oxidation of NADH by O2 to a series of lower energy redox reactions, which are used to pump protons across the membrane. The resulting H+ concentration (pH) gradient across the membrane is a form of stored energy, analogous to an electric battery.
Anaerobic respiration in bacteria
The amount of energy released by these redox reactions, and thus the amount of energy available for ATP synthesis, depends on the redox potential of the terminal electron acceptor. Oxygen (O2) has the greatest redox potential, and thus aerobic respiration results in the most ATP synthesized. Bacteria and Archaea can use other terminal electron acceptors with lower redox potential when oxygen is not available. This anaerobic respiration produces less ATP.
Bacteria can modify their electron transport chains to use a variety of electron donors and electron acceptors, and will switch to the best available in their environment. In marine sediments, microbial communities stratify according to redox potential. The deeper, more anoxic layers use electron acceptors with progressively lower reducing potential.

In addition to ATP synthesis, prokaryotic cells can use the proton motive force to supply energy for active transport of molecules across the plasma membrane, and to power the motor complex that rotates the bacterial flagellum.
Generalized explanation of aerobic and anaerobic respiration:

An evolutionary perspective
The generation of a proton gradient across a membrane and chemiosmosis are universal to life on earth, and are fundamental ways for cells to make a living. Lane and colleagues speculate that “proton power” may have been the earliest form of energy metabolism, essential to, and pre-dating, the last universal common ancestor, LUCA (Lane, 2009; Lane et al. 2010).
The earliest cells, prokaryotes living in an early Earth devoid of free oxygen, used various alternative electron acceptors to carry on anaerobic cellular respiration. After cyanobacteria invented oxygenic photosynthesis and pumped oxygen gas into the oceans and atmosphere, bacteria that adapted their electron transport chains to exploit oxygen as the terminal electron acceptor gained higher energy yield and thus a competitive advantage. One line of aerobic bacteria took up an endosymbiotic relationship within a larger host cell, providing ATP in exchange for organic molecules. The endosymbiont was the evolutionary ancestor of mitochondria. This endosymbiosis must have occurred in the ancestor of all eukaryotes, because all existing eukaryotes have mitochondria (Martin and Mentel, 2010). The evidence for the endosymbiont origin of mitochondria can be found in:

Powered by hundreds or even thousands of mitochondria, eukaryotic cells attained larger sizes and evolved true multicellular lifestyles.
My video on this topic, 23min. (includes the 3 short segments excerpted above)

Powerpoint slides used in the video above: B1510_module3_5_respiration_2011Fall

Put it all together: Microbial fuel cells