The first cells that arose about 3.5 billion years ago most likely resembled Bacteria or Archaea; they had relatively simple structures and lacked nuclei or internal organelles. Most phylogenetic trees of life show Archaea and Bacteria diverging first from the Last Universal Common Ancestor (LUCA). We infer therefore, that the LUCA had a simple cell structure, with cytoplasm bounded by some type of phospholipid bilayer membrane, and no nuclei or internal membrane compartments or organelles. 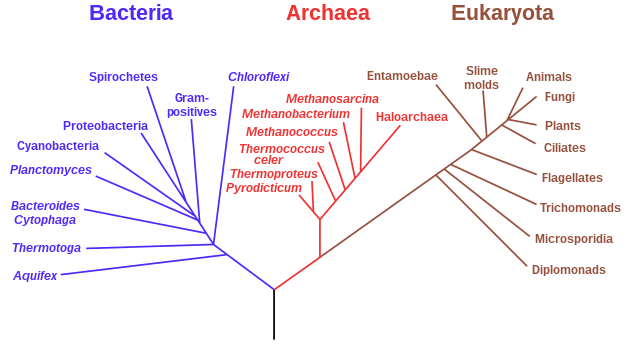 Phylogenetic Tree of Life with 3 Domains, based on 16S rRNA sequences, from Wikimedia Commons

Bacteria and Archaea are classified as prokaryotes, meaning cells without nuclei, although some modern biologists dislike the term because prokaryotes appear not to form a monophyletic group. 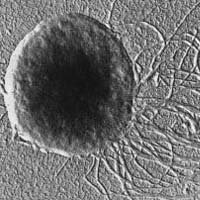 Methanococcus janaschii, with many flagella, image courtesy of UC Museum of Paleontology, www.ucmp.berkeley.edu.

Bacteria and Archaea have diverse cell morphologies, but they all have some common structural features. 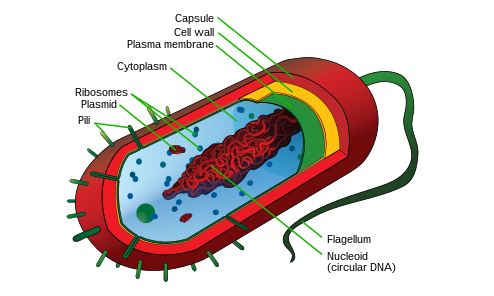 In addition to their phospholipid bilayer cell membrane, they have cell walls that differ in composition between Bacteria and Archaea. Prokaryotic cells are generally smaller than eukaryotic cells. They have a rudimentary cytoskeleton and can have flagella for motility. 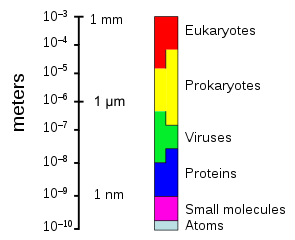 About 2.1-2.4 billion years ago, the first eukaryotic cells appear in the fossil record. This coincides with, or occurs soon after, the Great Oxygenation Event. Eukaryotic cell membranes have sterols, whose synthesis requires molecular oxygen. How did eukaryotes arise? One clue is that eukaryotic genes for proteins that replicate DNA and synthesize RNA in the nucleus are similar to Archaeal genes, whereas eukaryotic genes for energy metabolism and lipid biosynthesis in the cytoplasm resemble Bacterial genes. This observation led to the current hypothesis that eukaryotes evolved from an ancient endosymbiosis or cell fusion event between an Archaeon and a Bacterium.

Eukaryotic evolution required many innovations. One is endocytosis (taking in molecules bound to the plasma membrane by forming a small vesicle, a bubble-like structure made by a lipid bilayer sac enclosing internal fluid). Modern prokaryotes lack endocytosis or phagocytosis (taking particles into the cell by forming a large vesicle). But endocytosis or phagocytosis is essential for taking in and harboring endosymbionts within a membrane enclosure, and leads to formation of vesicles inside the cell. Invagination of the plasma membrane deep into the cytoplasm to surround the cell’s chromosomes can lead to the formation of a membrane envelope that separates the nuclear compartment from the rest of the cell, and simultaneous development of an endomembrane system. Therefore, phagocytosis/endocytosis can account for the formation of the nucleus enclosed by a nuclear envelope, the endomembrane system, and the evolution of mitochondria and chloroplasts from endosymbiosis of aerobic bacteria and cyanobacteria, respectively. 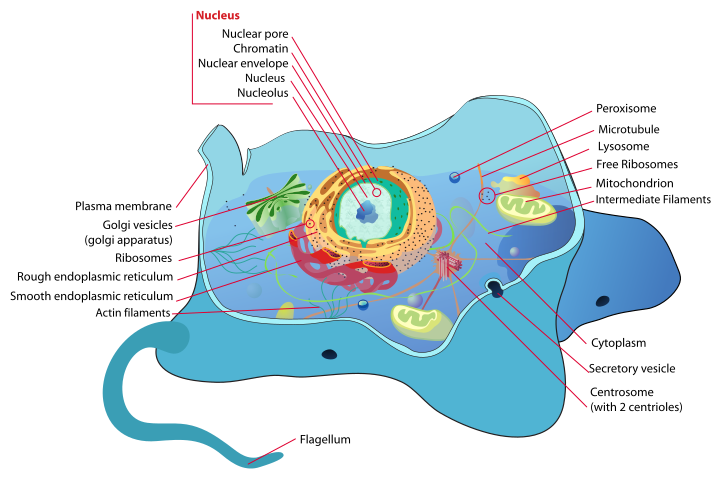 What should students in introductory biology know about the structure of a eukaryotic cell? Rather than trying to memorize details about the various organelles and cell structures, think about major cell systems.

The cytoplasm is the internal region of the cell bounded by the plasma membrane, excluding the interior of the nucleus and the interior regions of organelles and the endomembrane system. The cytoplasm contains ribosomes, tRNAs and mRNAs for protein synthesis, the cytoskeleton, many metabolic enzymes, and proteins that function in cell signaling. The cytoplasm is so crowded with macromolecules that it has the consistency of a hydrated gel; much of the water molecules are associated with other molecules. 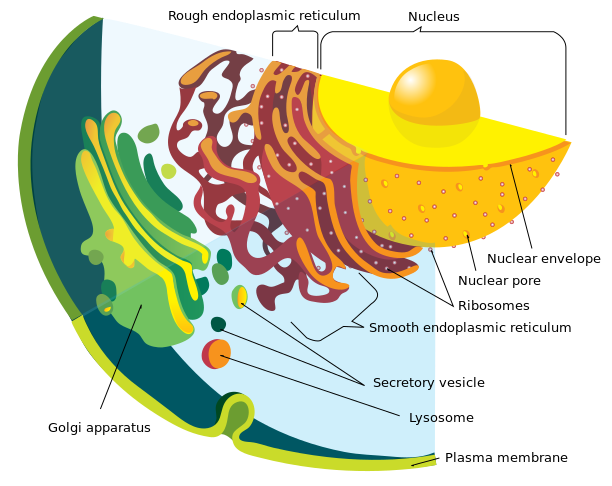 Endomembrane system: . The rough ER has ribosomes bound to the ER membrane. ER-bound ribosomes synthesize proteins into the ER membrane or lumen (internal space). Other ribosomes remain in the cytoplasm and synthesize proteins that remain in the cytoplasm or go to the nucleus or the mitochondria or chloroplasts. Image credit: Mariana Ruiz on Wikipedia https://en.wikipedia.org/wiki/File:Endomembrane_system_diagram_en.svg.

That all these membranes comprise a single system becomes clear when we think about membrane biogenesis. For cells to grow, they have to make more membrane lipids and membrane proteins.

Membrane proteins for the endomembrane system and proteins for secretion are made in the rough ER (rER) by ribosomes docked to protein channels in the ER membrane. The polypeptide chain emerging from the ribosome passes through the channel into the ER lumen (the interior space of the ER) and begins to fold. Any parts of the chain that form hydrophobic alpha-helices remain embedded in the ER membrane, as transmembrane domains. The newly synthesized proteins in the rER membrane or lumen move to the smooth ER, where they are partially glycosylated (oligosaccharide groups are covalently bonded to particular amino acids). Membrane lipids (phospholipids, sterols) are also made in and added to the smooth ER. Transport vesicles containing membrane proteins and secreted proteins bud from the smooth ER and travel to the Golgi. These vesicles fuse with the Golgi, adding their membrane lipids and membrane proteins, as well as their internal contents, to the Golgi vesicles. In the Golgi, the membrane proteins and secreted proteins are sorted and processed via additional glycosylation. Lysosomal proteins are segregated to vesicles that pinch off and become lysosomes. Secreted proteins are packaged into secretory vesicles that pinch off and are transported to the cell periphery, where the secretory vesicles fuse with the plasma membrane, adding their lipid and protein to the plasma membrane and dumping their internal contents to the outside of the cell.

Note that the endomembrane system does not include mitochondria or chloroplasts, which are independent organelles and will be discussed later in the context of energy metabolism. Proteins destined for mitochondria or chloroplasts, as well as proteins destined for the interior of the nucleus, are made by free cytoplasmic ribosomes (undocked to any membrane). These proteins are then imported into the respective organelles via specialized protein import systems (mitochondria and chloroplasts) or via the nuclear pore complexes (nuclei). Of course, proteins that function in the cytoplasm are also made by free cytoplasmic ribosomes.

The cytoskeleton is another cellular system. It consists of actin microfilaments, several types of intermediate filaments, and microtubules. These are dynamic structures required for cell shape, cell mobility, and organization and movement of materials inside the cell. Microfilaments are thinner, and form networks near the plasma membrane to either stabilize or change the shape of the cell, especially when parts of the membrane are extended outward. Microtubules (polymerized from dimers of alpha- and beta-tubulin) serve as tracks for movement of transport vesicles and secretory vesicles by motor proteins, and also for movement of chromosomes during cell division. In brief, microfilaments are for cell shape, microtubules are for moving stuff around inside the cell.

Outside the cell, overlying the plasma membrane, is the extracellular matrix. In plants and yeast, this is the cell wall. In animal cells, this consists of collagen and other polymers of protein and polysaccharides.

Watch the Inner Life of the Cell video below, and see if you can identify the various components of the endomembrane system and narrate what is going on. This video is for more advanced students, but the middle of the video, starting with the plasma membrane, beautifully illustrates the dynamic interconnections between the cell structures.

The key parts to watch for:

Here’s the full Inner Life of the Cell video with narration.