Recall from the beginning of this course the five generally agreed upon criteria for life:

Charles Darwin called this process natural selection. He and Alfred Wallace were the first to propose that evolution by natural selection could explain the origin of all the multitudes of species on Earth and how they appear so well-adapted in form and function to their particular environments. Moreover, Darwin proposed that all of life on Earth descended from a common ancestor, via slow, incremental accumulation of heritable (genetic) changes.

Because the definition of evolution is change in the heritable characteristics of a population over generations, evolution can occur by means other than natural selection. Evolution can also occur via random processes, especially in small populations, where the frequency of some heritable traits may rise or fall just by chance. We will discuss these mechanisms of evolution in a future class session.
The video below defines and gives examples of biological evolution, and ends with a teaser about the role of natural selection in biological evolution.

Evolution is a theory, not just a hypothesis

Darwin published his theory of evolution in the Origin of Species (1859), with carefully reasoned evidence to support this theory that all life on earth evolved from a common ancestor. This theory has been tested in numerous ways by the work of many thousands of scientists. Every test has produced results that are consistent with the theory. Evolutionary biologists conduct research to elaborate or refine the theory and understand the mechanisms at work in specific populations. Evolutionary theory now forms a framework for biological thinking, so that one famous evolutionary biologist wrote that “Nothing in Biology Makes Sense Except in the Light of Evolution” (Dobzhansky, 1973).

The scientific use of the word theory is very different from the casual, every-day use.  A scientific theory is an overarching, unifying explanation of phenomena that is well supported by multiple, independent lines of evidence—i.e., composed of hundreds or thousands of independent, well-supported hypotheses.  For example, germ theory is the theory that explains how microorganisms cause disease, and cell theory explains how cells function as the basic unit of life. 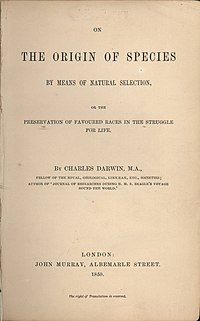 Title page of Darwin’s The Origin of Species, 1859 from Wikipedia

The video below highlights some of this key supporting evidence in the context of the evolution of whales:

Here are corrections to some common misconceptions about evolution by natural selection:

For thought and discussion:

Evolution 101 University of California Berkeley evolution site, a complete resource for learning and teaching about evolution. Engaging, well-illustrated, accurate.
How did feathers evolve? Carl Zimmer’s TED-Ed video, 3 1/2 minutes.
Evolution animation by Tyler Rhodes, produced from drawings made by children copying a drawing of a salamander-like animal with successive generations of variation, mass extinction and selection. The process is described in this Scientific American blog post http://blogs.scientificamerican.com/psi-vid/2012/02/29/an-evolution-animation-unlike-any-youve-seen-before/ and Tyler Rhodes blog http://evolutionanimation.wordpress.com/ describes both the drawing “game” and his animation process. His “wheel of life” is an amazing phylogenetic tree of the drawings.
Newly found: the world’s oldest fossils A post in the Why Evolution Is True blog by Jerry Coyne, explaining the paper by Wacey, D.,M. R. Kilburn, M. Saudners, J. Cliff, and M. D. Wacey et al. 2011. Microfossils of sulphur-metabolizing cells in 3.4-billion-year-old rocks of Western Australia.  Nature Geoscience online: doi:10.1038/ngeo1238
Darryl Cunningham Investigates: Evolution A lucid, inviting comic-strip presentation of basic evolutionary theory and evidence. Aimed at beginning learners.
Nothing in Biology Makes Sense Except in the Light of Evolution Dobzhansky’s 1973 essay in The American Biology Teacher 35:125-129, just as relevant today as then.

1 Response to What is evolution?