Although Rubisco is responsible for the vast bulk of organic carbon on the surface of the Earth, its oxygenase activity can severely reduce photosynthetic efficiency. Some plants have evolved a way to minimize the oxygenase activity of Rubisco.

For the curious: oxygenase activity of Rubisco, from Wikipedia. RuBP (1) interconverts to an enol isomer (2) that combines with oxygen to form the unstable intermediate (3) that hydrolyzes into phosphoglycolate (4) and 3PG (5)

The oxygenation of RuBP produces 2-phosphoglycolate, a 2-carbon toxic compound which undergoes a series of reactions in the peroxisome and mitochondria, releasing CO2 and resulting in loss of organic carbon and energy production. This process is called photorespiration – an awfully misleading name for students, because it has nothing to do with respiration and yields no ATP. All Biological Principles students need to remember about photorespiration is that it reduces photosynthetic efficiency, and that it occurs when Rubisco oxygenates RuBP instead of carboxylating RuBP.

Rubisco evolved even before oxygenic photosynthesis, when there was no oxygen in the atmosphere or in the ocean waters, so there was no selection against oxygenase activity. Nevertheless, in over 2 billion years, neither nature nor human genetic engineering has been able to eliminate or even significantly reduce the oxygenase activity of Rubisco without also affecting the carboxylase activity.

C4 plants have evolved a mechanism to deliver CO2 to Rubisco

In order for plants to take in CO2, they have to open structures called stomata on their leaves, which are pores that allow gas exchange.  Plants also lose water vapor through their stomata, which means that they can die from dehydration in dry conditions as they keep their stomata open for photosynthesis. In response, plants close their stomata to prevent dehydration. The immediate* consequences of closed stomata in the short term are reduced CO2 concentration (CO2 levels decrease as it is utilized for photosynthesis) and increased O2 concentration (O2 levels increase as it is produced by photosynthesis). The rising O2 levels increase the rate of photorespiration (reaction of rubisco with oxygen instead of carbon dioxide), when then drastically reduces the efficiency of rubisco, which is already a very slow-working enzyme. So this means plants in dry conditions are at risk of dehydration if they open their stomata to promote gas exchange, or inability to produce sugar if they keep their stomata closed to minimize dehydration. (*the long-term consequence of permanently-closed stomata is death by suffocation as the mitochondria run out of oxygen to carry out respiration.)

Many plants which live in hot and/or dry conditions have evolved an alternative carbon fixation pathway to enhance the efficiency of rubisco so that they don’t have to keep their stomata open as much, and thus they reduce the risk of dying from dehydration.  These plants are called C4 plants, because the first product of carbon fixation is a 4-carbon compound (instead of a 3-carbon compound as in C3 or “normal” plants). C4 plants use this 4-carbon compound to effectively “concentrate” CO2 around rubisco, so that rubisco is less likely re react with O2.

There are two important adaptations that allow C4 plants to do this:

Here’s how all this works:

PEP carboxylase is located in the mesophyll cells, on the leaf exterior near the stomata. There is no rubisco in the mesophyll cells. CO2 entering the stomata is rapidly fixed by PEP carboxylase into a 4-carbon compound, called malate, by attaching the CO2 to PEP. The malate is then transported deeper into the leaf tissue to the bundle sheath cells, which are both far away from the stomata (and thus far away from oxygen) and contain rubisco.  Once inside the bundle sheath cells, malate is decarboxylated to release pyruvate and CO2; the CO2 is then fixed by rubisco as part of the Calvin cycle, just like in C3 plants.  Pyruvate then returns to the mesophyll cells, where a phosphate from ATP is used to regenerate PEP.  Thus in C4 plants, C4 carbon fixation has a net added cost of 1 ATP for every CO2 delivered to rubisco; however, C4 plants are less likely to die of dehydration compared to C3 plants in dry conditions.

The image below illustrates the pathway we just described: 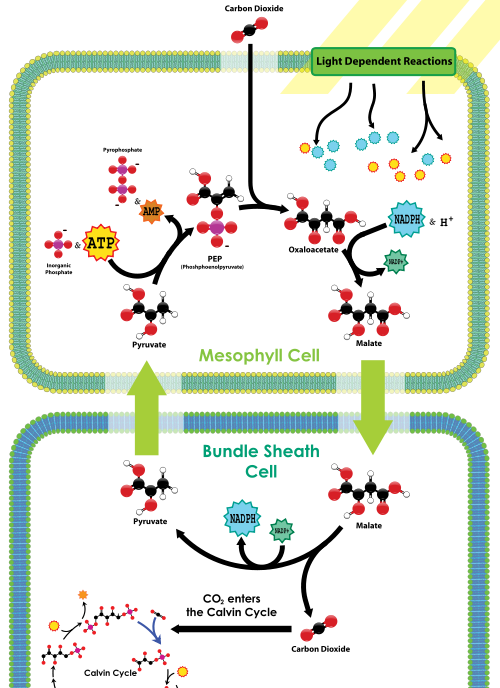 What Biological Principles students need to remember about C4 is that these plants have added a CO2 concentration mechanism to feed rubisco and the Calvin cycle; the mechanism uses PEP carboxylase to initially make a 4-carbon compound that then releases CO2 to rubisco in leaf cells that are exposed to little oxygen. While this mechanism reduces the oxygenase activity of rubisco, it has an extra energy cost in the form of another ATP per mole CO2 fixed.

If you want to know more, the video below gives a more thorough (albeit somewhat slow) illustration of this process:

Advantages and disadvantages of C4 and C3 carbon fixation

The chemical equations for oxygenic photosynthesis and aerobic respiration are exactly the reverse of each other.

A balance between the global rates of photosynthesis (primary production) and global rates of respiration is needed to maintain stable atmospheric concentrations of CO2 and O2.

In eukaryotes, both photosynthesis and respiration occur in organelles with double membranes and their own circular genomes, that originated as prokaryotic endosymbionts.

The powerpoint slides used in the video screencasts are in the Carbon fixation slide set.