Gene therapy works best by genetically repairing a patient’s stem cells. The easiest source of stem cells are from early embryos. The intersection of stem cell technology, genetic engineering, and cloning poses both scientific and ethical challenges. Before we consider how molecular cloning works, watch this video to learn what stem cells are and how they form:

Many organisms, such as bacteria and archaea, and diverse eukaryotes, reproduce asexually. Asexual reproduction results in progeny that are genetically identical to the parent, meaning that they are “clones” of the parent.

Most complex, multicellular eukaryotes, however, reproduce only sexually. Two haploid gametes unite to form a diploid cell, called a zygote, that reproduces mitotically to form all the somatic cells of a complex multicellular organism. During mitotic cell divisions, various cells express different sets of genes to differentiate into different organs, tissues, and cell types. Two fundamental questions of biology are: 1) how genes regulate the process of development, and 2) whether somatic cells undergo irreversible genetic changes as they differentiate.

Early experiments with cloning plants showed that individual somatic cells (cells that do not form pollen or egg) could form complete, new clonal plants, indicating that the somatic cells had no irreversible changes in their genome compared to the original fertilized egg cell.

The first studies to test whether vertebrate animals could be cloned used a technique called somatic cell nuclear transfer (SCNT), where nuclei from somatic cells were transferred to an egg cell whose own nucleus had been removed. 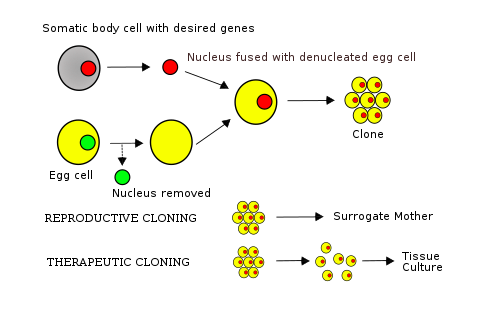 Somatic cell nuclear transfer, from Wikipedia. Transfer of a nucleus from a differentiated somatic cell into an enucleated egg cell creates a one-cell embryo that is genetically identical to the donor of the somatic cell nucleus. The embryo is stimulated to divide to form an early-stage embryo consisting of multiple cells (labeled “clone” in the figure). In reproductive cloning, this early-stage embryo is implanted into the uterus of a surrogate mother. In therapeutic cloning, the early-stage embryo is disaggregated to recover and culture embryonic stem cells. Image source: https://commons.wikimedia.org/wiki/File:Cloning_diagram_english.svg cc-by-sa-3.0

Early studies with enucleated frog eggs found that donor nuclei from early embryos supported development of a complete adult animal, but nuclei from tadpoles or adult frogs could not. These early results suggested that as vertebrate animals progressed through embryonic development, birth, and aging, their somatic cell nuclei became “programmed” to differentiate into specialized cells, rather than support embryonic development. We now know that this programming involves reversible modification of chromatin that restricts what genes can be expressed in differentiated cells.

The short video below shows the SCNT process:

In 1996, Ian Wilmut and colleagues found that by arresting adult somatic cell cultures in the cell cycle, he could erase some or most of their nuclear programming. Using cultured mammary gland cells from an adult sheep as the source of donor nuclei, he performed 277 SCNTs to create clone embryos. The embryos that divided normally were implanted into the uterus of foster mother sheep. Only a single lamb, Dolly, was successfully born alive and healthy from the 277 attempts. Since then, many other mammalian species have been cloned, with success rates varying from a few to low tens of percent.

Mammalian reproductive cloning is still inefficient, with a low success rate, complications during pregnancy, and possible premature aging of the cloned offspring (https://learn.genetics.utah.edu/content/tech/cloning/cloningrisks/). As far as we know, no reproductive cloning of humans has yet been attempted.

The human body is quite limited in its ability to regenerate or repair injuries or diseases that affect critical organs such as the brain, heart, and pancreas. Tissue and organ regeneration and gene therapy require a source of cells that can differentiate into the desired types of cells, for the life of the patient. Adult humans have distinct reservoirs of stem cells, located in different parts of the body (such as the bone marrow). Stem cells, by definition, can continue to divide and both replace themselves and produce progeny cells that differentiate into new blood and immune system cells, or skin cells, or cells that line the gut and airways, or muscle cells. But these adult stem cells are difficult to obtain from a patient, and they are restricted in the types of cells or tissues they can form. For example, the stem cells in the bone marrow can generate both white and red blood cells, but not skin cells or new brain cells or heart muscle or pancreatic beta islet cells (to cure diabetes).

Cells in an early human embryo, however, are “totipotent or pluripotent” – they can form any part of the human body. Such cells can be cultured indefinitely as embryonic stem cell lines. Existing human embryonic stem cell lines have been derived from in-vitro fertilized, early-stage human embryos, that would have perished without implantation into a uterus. These were “surplus” or “back-up” embryos from fertility clinics, that would have been discarded or put into indefinite cryo-storage.

Therapeutic cloning uses enucleated human eggs and somatic cell nuclear transfer technology to create a human embryo that is a genetic clone of the patient. The embryo is destroyed to obtain embryonic stem cells that have the same genotype as the patient. These cells can be cultured indefinitely, and hormonally induced to form new tissues and organs that will not be rejected by the patient’s immune system.

In the last decade, genetic engineering technology has been used to create a new type of stem cell: induced pluripotent stem cells (iPSCs). These cells, created by transforming adult differentiated cells (such as fibroblasts or skin cells) with 4-6 different transcription factors that regulate early embryonic cell growth and differentiation, have many of the properties of embryonic stem cells. The question is whether these transcription factor genes can be safely used to transform the patient’s own cells without causing unacceptably high risks of cancer once these cells are reintroduced into the patient’s body. Because iPSCs do not involve destruction of human embryos, they have been the focus of intense research. A review by Wilson and Wu (2015) provides a concise description of the state of the research and the challenges in this field.

Stem cells, depending on whether they were obtained from adults, embryos, or induced with transcription factors, can be induced to differentiate into different cell types to generate replacement organs and repair damaged heart muscle, pancreatic beta cells, spinal cord or brain cells. Coupled with genome editing, stem cells could be used to treat patients with genetic disorders.

Slides for the videos above:

4 Responses to Cloning and Stem Cells