Francis Crick coined the phase “the Central Dogma” to describe the flow of information from nucleic acid to protein. Information encoded in DNA is transcribed to RNA, and RNA is translated to a linear sequence of amino acids in protein. Although information can flow reversibly between DNA and RNA via transcription and reverse transcription, no mechanism has yet been found for alterations in protein amino acid sequence to somehow effect a corresponding change in the RNA or DNA.

This video gives a highly simplified overview of the central dogma of molecular biology:

And this video provides an animated overview of gene expression in a eukaryotic cell:

Transcription is the process of using DNA as a template to make an RNA molecule:

This video gives a simplified overview of transcription. Notice that the narrator makes a mistake at 3:45 (that he later catches and corrects!); this mistake serves as a really important reminder of one of the major differences between DNA and RNA, so watch for it.

Translation is the process of using an mRNA molecule as a template to make a protein:
Translating a sequence of bases in the RNA to a sequence of amino acids in proteins requires 3 major components: 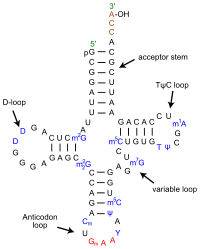 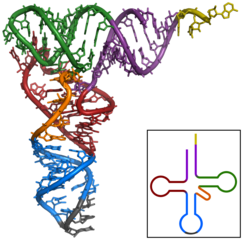 Tertiary structure of tRNA, from Wikipedia. The anticodon loop (in gray) base-pairs with the codon in the mRNA in anti-parallel orientation. The amino acid attachment site (yellow) is the location where the tRNA is covalently bonded to its amino acid.

Translation begins near the 5′ end of the mRNA, with the ribosomal small subunit and a special initiator tRNA carrying the amino acid methionine. In most cases, translation begins at the AUG triplet closest to the 5′ end of the mRNA. In eukaryotes, the small subunit of the ribosome typically just “scans” along from the 5′ end of the mRNA until it finds the first AUG codon. In prokaryotes, there is typically a specific sequence that the ribosome binds to, which “positions” the ribosome at the starting AUG. In either case, the large ribosomal subunit then docks and translation begins, always starting with an AUG codon (methionine) in both prokaryotes and eukaryotes. The ribosome moves along the mRNA 3 bases at a time, from the 5′ to the 3′ direction, and new tRNAs whose anti-codons are complementary to the mRNA codons arrive with their corresponding amino acids. A peptide bond forms to join the amino acid to the carboxyl end of the growing polypeptide chain. The ribosome moves another 3 bases, and the empty tRNA is ejected to make room for a new amino-acyl tRNA.

The polypeptide chain made by the ribosome also has directionality; one end has a free amino group and the other end of the chain has a free carboxyl group. These are called the N-terminus and the C-terminus, respectively. New amino acids are added only to a free carboxyl end, so polypeptide chains grow from the N-terminus to the C-terminus.
This video gives a solid overview of translation. It is a little longer than the typical videos we use on this site, but it does a really nice job of breaking down step-by-step what happens during translation:

Watch a much shorter molecular animation of translation here:
https://www.dnalc.org/resources/3d/16-translation-advanced.html

The universal genetic code. AUG (methionine, highlighted green) is the “Start” codon. The three codons labeled “Stop” in red are “nonsense” codons that signal termination of translation. From http://biology.kenyon.edu/courses/biol114/Chap05/Chapter05.html

This genetic code is universally used by all living organisms, whether Archaea, Bacteria or Eukarya, with only minor modifications in the mitochondria of a relatively few species. If you do the math, you can see that there are 64 possible codons (4^3), but we know that there are only 20 amino acids. Thus the code is “degenerate,” because the same amino acid can be specified by 2, 3, 4 or 6 different codons. For example, glycine can be specified by codons GGU, GGC, GGA, and GGG. Methionine is unusual in that it is specified only by a single codon: AUG. (Tryptophan is the only other amino acid specified by a single codon.)

If we consider just single nucleotide changes (substitutions, deletions or insertions of single bases), these can have very different consequences depending on whether they occur in the gene. Often a DNA base substitution will have no effect if they change the 3rd base in the codon, due to the degenerate nature of the genetic code. For example, changing GAG to GAA has no effect on the protein because both codons specify alanine. Such “silent” mutations are called “synonymous” mutations.

Some mutations create a new stop codon (UAA, UAG, or UGA). These are called “nonsense” mutations and cause truncated polypeptides to be made. Insertions or deletions (“indels”) of single nucleotides cause a change in the reading of all downstream codons; they are shifted by one base. Such “frameshift” mutations will alter most or all amino acids downstream (towards the 3′ end of the mRNA, towards the C-terminus of the protein) of the mutation.

Differences between prokaryotes and eukaryotes

Much of what is discussed above was originally discovered in bacteria, and then found to be true of archaea and eukaryotes as well; many of the core features of molecular biology are evolutionarily conserved. However, there are a few key differences as outlined below.

Prokaryotes: transcription and translation are coupled All of these processing steps actually happen while the mRNA is being transcribed; that is, they occur co-transcriptionally. So in reality, a full-length “pre-mRNA” never actually exists.

Eukaryotic pre-mRNAs are processed in the nucleus by adding a 5′ cap, 3′ polyA tail, and removal of introns via RNA splicing to create a mature mRNA consisting only of exons, ready for export to the cytoplasm for translation. From http://www.biology.arizona.edu/molecular_bio/problem_sets/mol_genetics_of_eukaryotes/03t.html

This video gives a nice quick overview of these differences between prokaryotes and eukaryotes:

Dr. Choi’s video lecture on this topic, in one 32-min chunk:

Test your knowledge with these questions & problems: B1510_module4-6_DNA_to_protein_questions