Today we take it for granted that DNA, present as a single chromosome or one of several chromosomes in the cell, is the genetic material that encodes all the information required to “build” an organism. But it was once a very controversial idea. Cells are incredibly complex collections of biological macromolecules that carry out diverse biological reactions, while DNA is an extremely simple molecule comprised of only 4 nucleotide bases. How could something so simple contain all the information required to build a cell?

Frederick Griffith worked with two strains of Streptococcus pneumoniae. The S strain produced a polysaccharide capsule and formed smooth-looking colonies. The R strain could not produce the polysaccharide capsule and formed rough-looking colonies. The S strain was virulent and killed mice. The R strain was non-virulent when injected into mice. Griffith reported in 1928 that mixtures of heat-killed extracts of the S cells plus live R cells killed mice, although neither injected alone were virulent. Autopsies of the dead mice showed bacterial cells in the blood. When cultured, these formed smooth colonies. He concluded that something from the extract of heat-killed S cells had transformed some of the R cells into S cells. 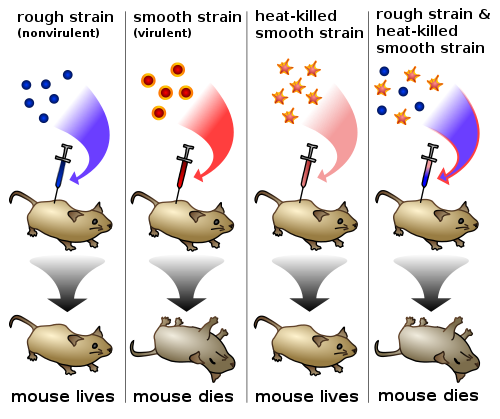 Avery, McLeod and McCarty showed that bacterial transformation is due to DNA

Here is a video summary of the design and conclusions from these two sets of experiments:

T2 is a virus that infects E. coli cells; viruses that infect prokaryotic cells are called bacteriophage or phage. Bacteriophages are composed of just proteins and a DNA molecule packaged inside the phage. 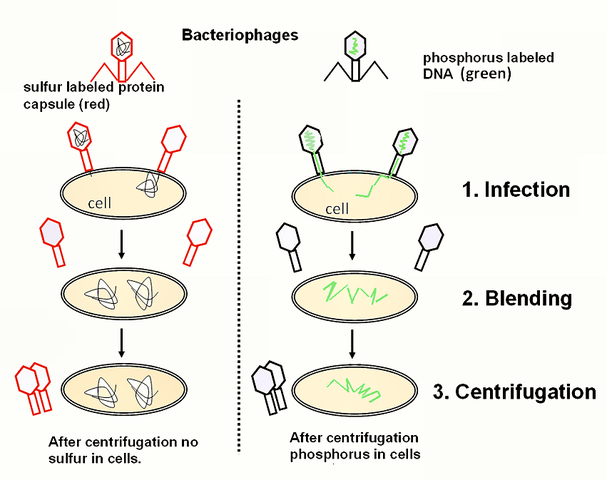 Here is a video that summarizes the design and conclusions of the Hershey-Chase experiment:

The biochemist Erwin Chargaff analyzed the base composition of DNA from a wide variety of species, and found that although the percentages of Adenine, Guanine, Cytosine and Thymine varied from species to species, the following proportions were always seen:

Watson and Crick used Rosalind Franklin’s X-ray diffraction data on purified DNA to deduce that DNA has a helical structure. They were able to solve the structure of DNA when they realized that the molecule was a duplex consisting of two anti-parallel strands, with the sugar-phosphate backbone was on the outside, and the bases paired on the inside with hydrogen bonds between A and T, or between C and G. The pairing of the bases accounted for Chargaff’s rules. 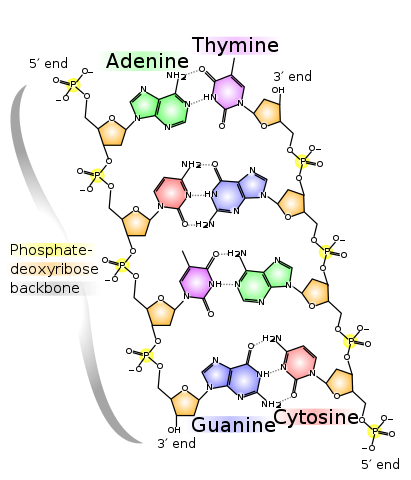 Part 3: The Meselson-Stahl experiment revealing the mechanism of DNA replication

Meselson and Stahl demonstrate that DNA replication cannot be conservative or dispersive, must be semi-conservative

The structure of DNA, consisting of two complementary strands, suggests that DNA could replicate by unzipping into two separate strands, and each strand would serve as the template for the synthesis of its complementary partner strand. This is called semi-conservative replication, because each resulting daughter DNA molecule would consist of one original (parental) strand and one newly synthesized strand. Other possible modes would be conservative replication, and dispersive replication. 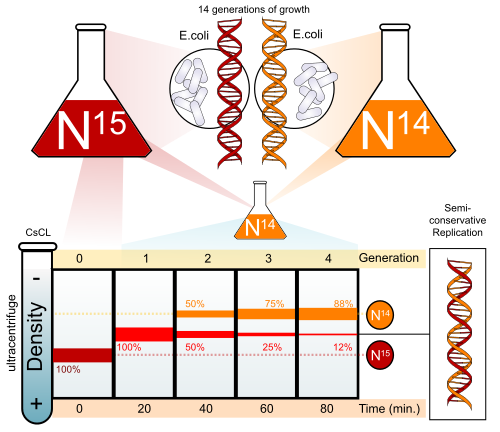 Meselson and Stahl used a density isotope of nitrogen to label DNA and test alternative hypotheses for how cells replicate their DNA. Source: Wikimedia Commons (https://commons.wikimedia.org/wiki/File:Meselson-stahl_experiment_diagram_en.svg)

Students should work through the results predicted by conservative and dispersive modes of replication, and explain how the observed results disprove these alternative hypotheses.

Here is a video summary of the Meselson-Stahl experiment:

Part 4: The enzymes of DNA replication and replication differences at the leading vs lagging strand

DNA replication proceeds bidirectionally from an origin of replication, but the two strands are replicated differently 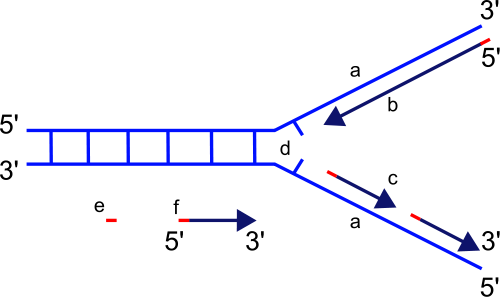 As the replication fork extends in one direction above, the leading strand (top strand) can be synthesized continuously because it is proceeding in the 5′ to 3′ direction. The lagging strand must be synthesized in short fragments as the DNA fork extends. This is because DNA synthesis must ALWAYS proceed in the 5′ to 3′ direction (adding the 5′ phosphate end of a new nucleotide to the 3′ hydroxyl group of the last nucleotide in the existing chain), but the lagging strand template is running the ‘wrong’ way for synthesis to occur in the direction of the replication fork. Note both strands require RNA primers (red) to begin DNA synthesis.

In the panels below, you can see movement of the replication fork “in action,” and why the leading strand has continuous synthesis while the lagging strand is composed of short fragments based on the direction of DNA synthesis in the 5′ to 3′ direction:

In the image below, you can see that each side of the replication “bubble” or “eye” has two replication forks, and each fork has a leading and a lagging strand:

This video provides an engaging summary of the ideas discussed above for DNA structure and the enzymes involved in DNA replication (see if you can spot the mistake on DNA structure):

For more help with these topics, you can view Dr. Choi’s video lectures below. The experiments proving that DNA is the hereditary material, and the structure of DNA:

The Meselson-Stahl experiment and DNA replication:

Put it all together: forensic_dna_sequencing_2012

Molecular animation of the “trombone” model of DNA replication:
https://www.dnalc.org/resources/3d/04-mechanism-of-replication-advanced.html