Earth History and History of Life on Earth

Evolution writ large takes a great deal of time. Natural selection will favor different genetic variants as geologic conditions change, such as climate, chemical composition, and sea level. A key of Charles Darwin’s thinking was his study and familiarity with the latest advances in the science of geology, including the works of Hutton and Lyell. And interpretation of the fossil record, and inferring the sequence of evolutionary changes, would be impossible without a grounding in the fundamentals of stratigraphy.

Fossils are found in sedimentary rocks

There are 3 different kinds of rocks:

Dating and ordering the geological record

Stratigraphy applies to sedimentary rock formations. The fundamental principle is that newer layers are always deposited on top of older layers. Therefore, a vertical dig reveals a historical record, with deeper digs revealing older sedimentary deposits. However, crustal movements and uplifts may cause these layers to tilt, fold and even become inverted in some locations.  In addition, erosion can cause loss of layers and gaps in the rock record, called unconformities. 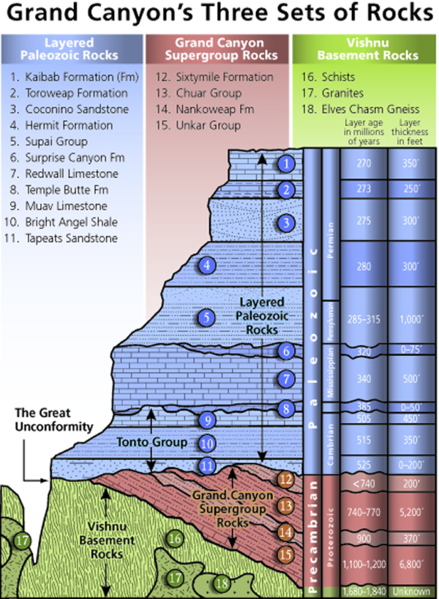 Stratigraphy of the Grand Canyon. Image from Wikipedia

Stratigraphy reveals the order of geological events, but not their absolute dates. Depending on the age of the rocks or samples and their type, various radioisotope decay methods may be used to estimate the absolute ages of rocks found in different layers. This page by Dr. Roger Wiens has a thorough explanation of how carbon-14 and potassium-40 and other isotopes are used to date rocks and fossils of different ages. In brief:

Amount of parent isotope remaining after passage of time, indicated in half-lives. from https://www.asa3.org/ASA/resources/wiens.html

This figure shows exponential decay of a parent radioactive isotope, contrasted with the linear decrease of sand in an hourglass. For samples containing organic carbon, the fraction of C-14 remaining in the sample can be used to determine how many half-lives, and hence years, have passed since the organic matter was formed.

The major geologic periods that are important for diversification of life span the last 540 million years: During this time the continents have been in constant motion across the surface of the earth, splitting and merging. This video animation reconstructs continental movements for the last 560 million years:

Often the major eras and periods of Earth history are arranged on a clock face in an effort to visualize the amount of time that has passed since each period, as such: Major periods of earth history, shown as a clockface, with time going from 4.5 billion years ago at the 12:00 start position proceeding clockwise to the present at the 12:00 position. Image from Wikipedia: By WoudloperDerivative work: Hardwigg – File:Geologic_clock.jpg, Public Domain, https://commons.wikimedia.org/w/index.php?curid=11926892

However, humans are very bad at thinking about time.  But we’re pretty good at thinking about distance.  So let’s “map” the different periods of Earth history and major evolutionary milestones onto a—you guessed it—map.  Let’s take a trip from Disney World to a classroom inside the Clough building on Georgia Tech campus.  If the location of Disney World in Orlando, Florida is the origin of the Earth (A), and the Clough building is present day (B), that means we have 441 miles to travel 4.6 billion years.

Here is our map so far:

Now let’s zoom in a little:

Here is our updated map: The average first year student at Tech is about 18 years old.  On this scale, that puts their age at about 1/10th of an inch. Remember, we started out at Disney World, about 441 miles away (4.6 billion years ago)!

Co-evolution of life and the planet Atmospheric and oceanic conditions have changed over time alongside (and promoting) conditions of organismal evolution Credit: Brian Kendall, Department of Earth and Environmental Sciences, University of Waterloo

The Cambrian “explosion” refers to an increase in biodiversity of multicellular organisms at the start of the Cambrian, 540 million years ago. Multicellular life appeared only several tens of millions of years before the start of the Cambrian, as enigmatic fossils (Ediacaran biota) exhibiting body plans unlike present-day animals. These largely disappeared and were replaced by Cambrian fauna, whose variety includes all of the body plans found in present-day animal phyla. The appearance of Cambrian fauna span millions of years; they did not all appear simultaneously as the term “explosion” inaccurately implies.

Periods of increasing biodiversity and rapid speciation are called evolutionary radiations. They occur when new ecological niches become available, as after a mass extinction. They may also occur in response to an evolutionary innovation. One example would be the evolution of jaws. The ability to bite gave predators a huge advantage. Prey species adapted in a variety of ways, such as faster speed, body armor, defensive weapons such as horns and stingers, chemical defenses in the form of poison, larger body size, smaller body size, etc.

The Cambrian radiation also coincides with an increase in free oxygen to near-present day levels.

The increase in oxygen enabled the evolution of larger bodies and organs and tissues, such as brains, with high metabolic rates.

The increase in oxygen is a dramatic example of how life can alter the planet. Evolution of oxygenic photosynthesis changed the planet’s atmosphere over billions of years, and in turn caused radical shifts in the biosphere: from an anoxic environment populated by anaerobic, single-celled prokaryotes, to eukaryotes living in a micro-aerophilic (low-oxygen) environment, to multicellular-organisms in an oxygen-rich environment.

Human impacts are the latest in a succession of major evolutionary influences. We are now altering the planet with as yet undetermined consequences for life on Earth.

No other planet in our solar system has oxygen gas in the atmosphere. Oxygen is highly reactive, and quickly consumed by oxidation reactions. On Earth, oxygenic photosynthesis continually replenishes the oxygen consumed by respiration and other oxidative processes (e.g., rusting of iron, weathering of rocks). The history of oxygen gas in the Earth’s atmosphere sums up the history of life.

Here’s a link to an HHMI Interactive on the oxygen history on earth. Select region 2 and click on “Howie” to step into an explanation of the two hypotheses of how oxygen outgassed into the atmosphere.

The Earth experienced large swings in global temperature, from “snowball” to hothouse, and intermittent glaciation. Note the conditions during the entire period of hominid evolution (circa 3 Mya) and recorded human history (circa 10 Kya). Also note the change in scale on the X axis (time).

Reconstruction of global temperature in the Phanerozoic. Note that these are a series of different linear scales on the time axis. Click the image to enlarge and for more information on the sources of data used to construct this timeline. From Wikimedia Commons; Image Credit: Glen Fergus.

Reconstruction of Phanerozoic atmospheric carbon dioxide concentrations. Time axis is a log scale. Click the image for more information about the data and analysis used to construct this timeline. by Gavin Foster, Dana Royer and Dan Lunt

Multiple factors caused these large swings in global temperature, including changes in solar output, extreme volcanic activity, meteor strikes, and atmospheric greenhouse gases, such as carbon dioxide. The figure above by Foster et al. shows that carbon dioxide levels above 400 ppm are now the highest in the past 10 million years.

And this recent comic from XKCD graphs what we know about the Earth’s temperature from ~20,000 BC to present day, with projections for the future based on current CO2 emission patterns:

A Timeline of Earth’s Average Temperature Since the Last Ice Age Glaciation. https://xkcd.com/1732/

Earthviewer app for tablets allows visualization of Earth through time

Radiometric Dating: A Christian Perspective a long and thorough, and yet very readable, explanation of how radiometric dating works, how the techniques are calibrated, the sources of error. The “Christian perspective” is about countering young-Earth misconceptions from any religious belief.

7 Responses to Earth History and History of Life on Earth