One of the defining and essential features of life is genetic material. An organism’s genome is the complete set of all genes and genetic material that is present in that organism or individual cell. Often we think of genes in terms of protein-coding genes, or genes that are transcribed into mRNAs and then translated into protein; however, genomes consist of a lot more than just protein coding genes. In addition, the features of prokaryotic and eukaryotic genomes differ in terms of both size and content.

One gene is transcribed, then spliced in different ways to produce mRNAs that encode related proteins from different exon combinations. http://www.genome.gov/Images/EdKit/bio2j_large.gif

What accounts for the variation in genome size?

There is no good correlation between the body size or complexity of an organism and the size of its genome. Eukaryotic genomes sequenced thus far have between ~6,000 and ~30,000 protein-coding genes, or less than 10-fold variation in the number of genes. The human genome has about 21,000 protein-coding genes (recently revised to as few as ~19,000 genes). Therefore, the 10,000-fold variation in eukaryotic genome size is due mostly to varying amounts of non-coding DNA.

Here is a quick comparison of the genome size and predicted gene number for a sampling of eukaryotes:

It’s very interesting to note that humans have about the same number of genes as the microscopic nematode worm, C. elegans, and fewer genes than rice.

What’s in the human genome? 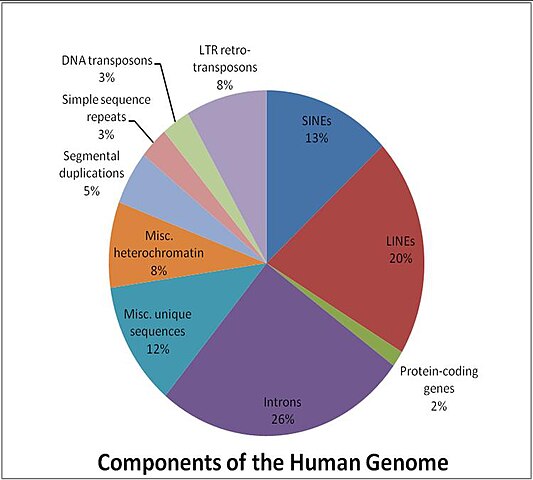 Recent publication of data and papers from the ENCODE project, a systematic survey of the human genome variation and activity from chromatin modifications to transcription, has claimed that, contrary to previous belief, fully 80% of the human genome has at least some biochemical activity, such as transcription (The ENCODE Project Consortium, 2012). Indeed, many small RNAs, called microRNAs (miRNAs) with important regulatory roles are transcribed from intergenic regions. However, these miRNAs and other regulatory RNAs comprise less than 1% of the human genome, and other studies have indicated that only 10% of the genome appears to be subject to some evolutionary constraint (review by Palazzo and Gregory, 2014).

The human genome project was accomplished by large banks of automated sequencers that used the Sanger dideoxy sequencing technology. In recent years, however, massively parallel sequencing technologies have brought down the cost and throughput of DNA sequencing much faster than computing speed and power has increased (Moore’s Law). The implications for being able to obtain huge amounts of DNA sequence quickly and cheaply has startling implications for biological research in all fields, and for human health. The TedTalk below by Richard Resnick discusses some of the applications:

How genomics is affecting people:

The story of two Georgia Tech grads, and how DNA sequencing and social media launched discovery and research of a previously unknown genetic disease:  http://www.newyorker.com/magazine/2014/07/21/one-of-a-kind-2

A story in Atlantic (9/2015): How Genome Sequencing Creates Communities around Rare Disorders