Cells express (transcribe and translate) only a subset of their genes. Cells respond to environmental signals by turning on or off expression of appropriate genes. In multicellular organisms, cells in different tissues and organs differentiate, or become specialized by making different sets of proteins, even though all cells in the body (with a couple of exceptions) have the same genome. Such changes in gene expression, or differential gene expression among cells, are most often regulated at the level of transcription.
There are three broad levels of regulation of gene expression:

Similarities between prokaryotes and eukaryotes: promoters and regulatory elements

Some genes are not subject to regulation: they are constitutively expressed, meaning they are always transcribed. What sorts of genes would you imagine a cell would always need to have “on,“ regardless of the environment or situation?

Differences between prokaryotes and eukaryotes: mechanisms of co-regulation

Often a set of proteins are needed together to respond to a certain stimulus or carry out a certain function (for example, many metabolic pathways). There are often mechanisms to co-regulate such genes such that they are all transcribed in response to the same stimulus. Both prokaryotic and eukaryotic cells have ways of co-regulating genes, but they use very different mechanisms to accomplish this goal.

In prokaryotes, co-regulated genes are typically organized into an operon, where two or more functionally related genes are transcribed together from a single promoter into one long mRNA. This mRNA is translated to make all of the proteins encoded by the genes in the operon. Ribosomes start at the 5′ end, begin translating at the first AUG codon, terminate when they run into a stop codon, and then re-initiate at the next AUG codon.

With a few exceptions (C. elegans and related nematodes), eukaryotic genomes do not have genes arranged in operons. Instead, eukaryotic genes that are co-regulated tend to have the same DNA regulatory element sequence associated with each gene, even if those genes are located on completely different chromosomes. This means that the same transcriptional activator or repressor can regulate transcription of every single gene that has that particular DNA regulatory element associated with it. For example, eukaryotic HSP (heat shock protein) genes are located on different chromosomes. HSPs help cells survive and recover from heat shock (a type of cellular stress). All HSP genes are transcribed simultaneously in response to heat stress because they all have a matching DNA sequence element that binds a heat shock response transcription factor.

Chromatin can be condensed in a 30-nm fiber formation (tightly compacted nucleosomes) or loosely arranged as “beads-on-a-string,” where the DNA between and around nucleosomes is more accessible. The degree of compaction is controlled by post-translational modifications that are added to the histones in the nucleosomes. When histones have acetyl groups added to them by enzymes called histone acetyl transferases (HATs), the acetyl groups physically obstruct the nucleosomes from packing too densely and help to recruit other enzymes that further open the chromatin structure. Conversely, when the acetyl groups are removed by histone deacetylases (HDACs), the chromatin assumes a condensed formation that prevents transcription factors from being able to access the DNA. In the image below, you can clearly see how much more compact and inaccessible the 30-nm fiber is (top) compared to the beads-on-a-string formation (bottom).

Chromatin plays a fundamental role in positive and negative gene regulation because transcriptional activators and RNA polymerase cannot physically access the DNA regulatory elements when chromatin is in a compact form.

Prokaryotic DNA does have some associated proteins that help to organize the genomes, but it is fundamentally different from chromatin. Prokaryotic DNA can essentially be thought of as ‘naked’ compared to eukaryotic chromatin, so prokaryotic cells lack this layer of gene regulation.

Another difference between prokaryotic and eukaryotic gene regulation is that eukaryotic mRNAs must be properly processed with addition of the 5′ cap, splicing out of introns, and addition of the 3′ poly(A) tail (discussed in more detail here). Each of these processing steps is also subject to regulation, and the mRNA will be degraded if any of them are not properly completed. The export of mRNAs from the nucleus to the cytoplasm is also regulated, as is stability of the properly processed mRNA in the cytoplasm.

Putting it all together: the lac operon in E. coli

The lac operon is a good model for understanding gene regulation. You should use the information below to make sure you can apply all of the details of gene regulation described above to a specific example. 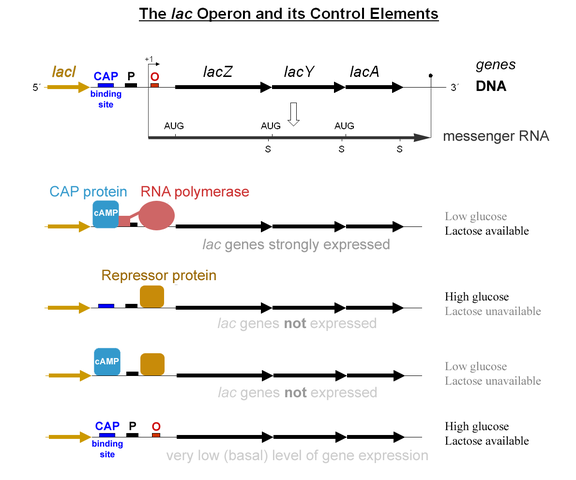 The lac operon of E. coli has 3 structural genes required for metabolism of lactose, a disaccharide found at high levels in milk:

An mRNA encoding all 3 proteins is transcribed at high levels only when lactose is present, and glucose is absent.

When lactose is present, an inducer molecule derived from lactose binds allosterically to the Repressor, and causes the Repressor to leave the Operator site. RNA polymerase is then free to initiate transcription, if it successfully binds to the lac promoter.

Positive regulation by CAP—Glucose is the preferred substrate for energy metabolism. When glucose is present, cells transcribe the lac operon only at very low levels, so the cells obtain most of their energy from glucose metabolism. RNA polymerase by itself binds rather poorly to the lac promoter.

Glucose starvation causes a rise in the level of cyclic adenosine monophosphate (cAMP), an intracellular alarm signal. Cyclic AMP binds to the catabolite activator protein (CAP). The CAP+cAMP complex binds to the CAP binding site near the lac promoter and recruits RNA polymerase to the promoter.

High level transcription of the lac operon requires both that CAP+cAMP be bound to the CAP binding site, and that Repressor is absent from the Operator. These conditions normally occur only in the absence of glucose and presence of lactose.