THIS CONTENT WILL NOT BE COVERED OR TESTED IN S16. THE READING FOR FRIDAY IS HONEY BEE ECOLOGY

Honey bee diseases and immune responses
In recent years, honey bee colonies in the U.S. have suffered due to a variety of recently introduced pathogens.  The Varroa destructor mite is the most serious of these because they weaken the bees directly as well as acting as a vector for viral diseases such as Deformed Wing Virus (DWV), Kashmir Bee Virus (KBV), Acute Bee Paralysis Virus (ABPV), and Israeli Acute Paralysis Virus (IAPV).  It was recently shown that Varroa is responsible for the dramatically altered the viral profile of honey bees. [1]
How do honey bees defend themselves from disease?  They lack the adaptive immune responses found in most vertebrates, but they have both innate immune responses  and protective behavioral responses such as hygenic behavior. Innate immune responses allow cells to respond to certain classes of pathogens via invariant receptors on the cell surface. These receptors are called Pattern Recognition Receptors (PRRs) and one class of PRRs are called Toll-like Receptors (TLRs). In the image below TLR-4, binds to an element found in the outer membrane of Gram-negative bacteria called lipopolysaccharide or LPS.  When LPS binds TLR-4 a cascade of events occurs in the cell, ultimately resulting in events that are protective against gram-negative bacteria such as phagocytosis.  When phagocytic white blood cells engulfs bacteria, they release enzymes that degrade and destroy the bacteria. 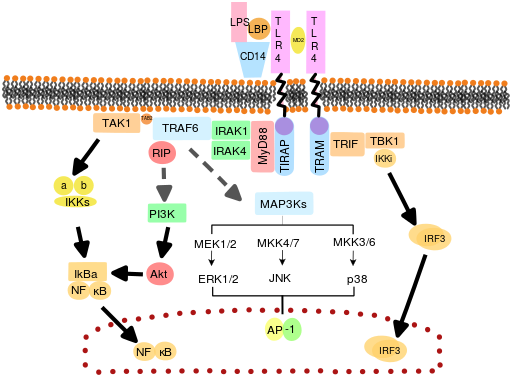 By Niels Olson (I drew it with Inkscape) [GFDL or CC BY-SA 3.0], via Wikimedia Commons
Honey bees also have an interesting social behavior called hygenic behavior  that the protects the colony during infection.  If worker bees notice that larvae or pupae are diseased, they will remove them from the hive.  This limits the spread of disease.  Photos of what hygenic behavior looks like can be found here: https://beeinformed.org/2011/07/25/hygienic-behavior/
Innate vs. adaptive immune responses
Even the most primitive living organisms are under threat from pathogens.  Did you know that bacteria and archaea are infected with a vast array of viruses?  One of the most important tools utilized by molecular biologists, restriction endonucleases, are a kind a primitive immune defense that bacteria use to degrade the DNA of their viral attackers. Insects use an array of other innate defenses against pathogens including antimicrobial peptides, phagocytosis, apoptosis, lysozyme production and an insect-specific innate immune response known as melanization. In every case, however, these innate immune responses act on broad classes of pathogens and act in the same way regardless of whether an individual has been infected before.
In contrast to innate responses, adaptive immune responses are specific to only the pathogens that an individual has been infected with.  These responses are also much more robust the second time that an individual is infected with the same pathogen, allowing an individual to become immune.  In the video below the distinguished scientist Ira Mellman, a member of the National Academy of Sciences and now Vice President of Research at Genentech, describes innate and adaptive responses.

Human Immune Responses to Honey Bees
Immune responses to honey bee venom can vary from mild inflammation to anaphylactic shock depending on the genetics and exposure history of the victim.  Severely allergic individuals have high levels of a specific class of antibodies called IgE against venom proteins.   These antibodies coat mast cells and, upon binding venom proteins, cause the mast cells to release inflammatory mediators such as histamine, prostaglandins and leukotrienes.  In low concentrations these mediators cause swelling and redness and at high enough concentrations blood pressure drop and death can result.
Inflammatory mediators can be produced at the site of a sting even when an individual is not allergic, as a result of the innate immune response to venom.  Regardless of whether inflammation occurs, stings HURT.  The 2015 Ig Nobel prize was awarded to Michael Smith from Cornell University who tested (ON HIMSELF!) what body part hurts the most when it gets stung.  In this video, Georgia Tech biology alum Kevin Wolfe explains.