We, and all large animals, are large bags of warm meat and broth, a rich food source not just for predators with jaws and claws, but also for the even more deadly, and ubiquitous, microbial and viral pathogens. We live because our immune cells are able to kill or neutralize these invisible predators. What is even more remarkable is that our immune cells evolve repeatedly during our lifetime. Within weeks, they evolve and adapt to fight pathogens never before seen by the individual, or encountered in previous human evolutionary history. How does this remarkable immune system work?

All organisms, from bacteria to trees to worms and humans, have innate immune defenses. These range from physical barriers to anti-microbial chemicals. But only jawed vertebrates have evolved the complex, adaptive immune system featuring antibodies and killer cells that recognize billions of different molecules with high specificity. The specificity of the adaptive immune system arises from its antigen receptors. An admittedly circular definition of an antigen is a molecule that binds to an antigen receptor: either a T-cell receptor (TCR) or an antibody molecule (immunoglobulin, Ig).

T cells and B cells are lymphocytes, types of white blood cells, that are able to recognize foreign (non-self) antigens. T cells have dimeric T-cell receptors on their cell surface; B cells have tetrameric cell-surface antibodies. Activated B cells divide and differentiate into plasma cells that secrete large amounts of soluble antibody molecules.

Each pre-B cell or pre-T cell undergoes random combinatorial rearrangement of one copy of its immunoglobulin or TCR loci. This DNA rearrangement occurs only in differentiating B and T cell lineages. The DNA segments, called V (variable), D (diversity), and J (joining), when joined together encode the variable domain of the immunoglobulin or TCR polypeptide chain. The result is that each mature, naive (has never been activated) B or T lymphocyte expresses a unique antigen receptor on its cell surface. 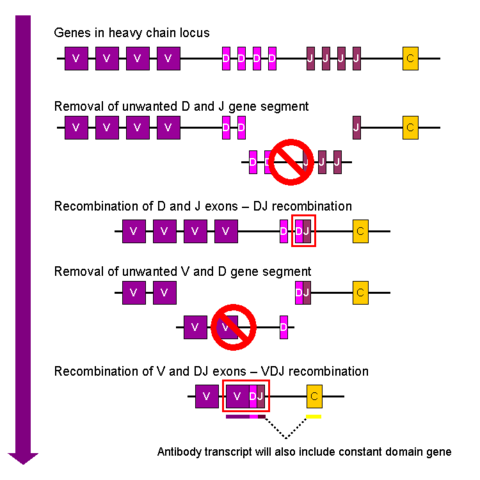 A surprising finding was that antigens had to undergo processing before they could evoke an immune response. The body has professional antigen presenting cells (APCs) that have phagocytic activity and express Class II Major Histocompatibility (MHC) proteins. The most important professional APCs are macrophages, dendritic cells, and B cells. These cells phagocytose or endocytose pathogens or foreign macromolecules, digest them to peptide fragments, and then export these peptide fragments bound to MHC II proteins to the cell surface for inspection by helper T cells. Any substance that cannot be 1) processed and 2) displayed on MHC II proteins cannot provoke an immune response.

1) an antigen or pathogen is phagocytosed or endocytosed by an antigen presenting cell (APC: macrophage or dendritic cell) 2) Processing by the APC generates peptide fragments 3) Peptide fragments are bound to MHC II molecules and presented on the surface of the APC 4) A helper T cell recognizes the peptide-MHC II complex via its T-cell receptor and is activated to divide 5) A B cell binds the antigen via its cell surface antibody. 6) The antigen-antibody complex is endocytosed and processed. 7) The B cell presents processed peptide on MHC II molecules 8) An activated helper T cell recognizes the peptide:MHC II complex 10) the helper T cell activates the B cell 9) the B cell divides and produces plasma cells that secrete lots of antibody molecules

B cells are responsible for the humoral (noncellular; mediated by soluble proteins) branch of the immune system: antibody molecules. B cells recognize and bind antigen via their cell surface Ig. They endocytose, process and present the peptide ag fragments on their cell surface MHC II proteins. If these are recognized by a previously activated helper T cell, the helper T cell stimulates the B cell to divide, and form both plasma cells that secrete vast amounts of soluble antibody, and long-lived memory B cells.

The cell-mediated branch of the immune system relies on cytotoxic T cells (cytotoxic T lymphocytes = CTLs). CTLs are the internal security forces. CTLs look for cells that are presenting non-self or altered peptides on Class I MHC molecules. 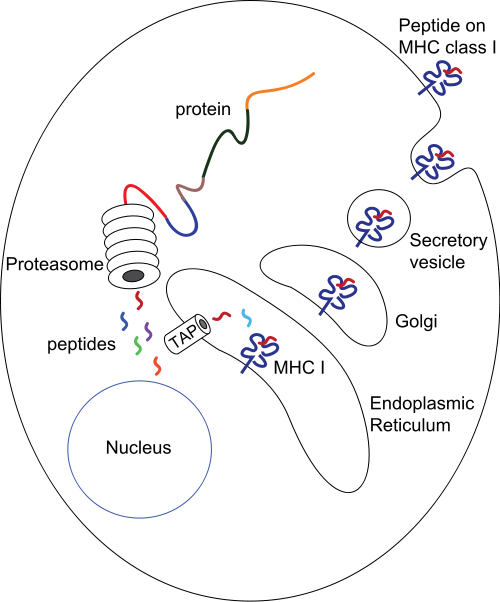 Processing and presentation of cellular antigens by MHC I molecules, from Wikipedia

CTLs whose T-cell receptors recognize these foreign or tumor peptide-MHC I complexes become activated and kill the virus-infected or cancerous cell. CTLs also kill cells that express a different MHC I allele than the host – this is the basis for tissue graft rejection, and why tissue and organ transplants must match at their MHC I loci.

The killing mechanism is two-fold. First, the CTL sends signals to the target cell to induce apoptosis (programmed cell death, cellular suicide). If that doesn’t work, the CTL secretes granzymes (destructive enzymes) and perforins, proteins that assemble in the target cell membrane to create holes and destroy the target cell.

The adaptive immune system operates on evolutionary principles of selection. The B cells and T cells have genetic diversity. Each B or T cells has a unique antigen receptor created by random combinatorial joining of their antigen receptor DNA segments. Foreign antigens selectively activate those B and T cells whose antigen receptors can bind the antigen. The B and T cells whose receptors have the highest affinity for the foreign antigen produce the most clonal progeny, all with the same antigen receptors as the parental cells. Some of these progeny become “effector” cells that activate and execute the humoral and cellular immune responses. Other progeny cells become long-lived memory B and T cells. Because the body now has an expanded population of these memory cells, the next time the same pathogen enters the body, it will be recognized much more quickly, and the immune response will be much stronger.

A very nice overview of the immune response, in just 6 minutes!